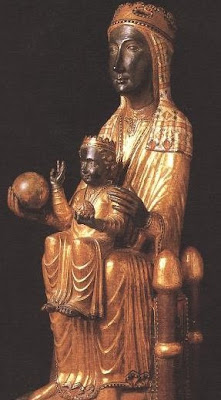 I had some exciting news last week. I've been accepted to do an artist residency in Can Serrat, Spain for next fall. It's about 45km from Barcelona. There are a couple of websites devoted to artist residencies. The one I used is called Res Artis.

What mainly drew me to this area of Spain was my interest in seeing the Black Madonna in the monastery at Montserrat, about a three hour uphill hike from Can Serrat. This famous site of holy visions became a place of religious pilgrimage and has been for centuries, possibly going back to pre-Christian times.

"The history of Montserrat is fascinating and started in 880 when a small group of shepherd children saw a bright light descending from the sky in the Montserrat mountains. In the same moment the children heard angels singing and the music filled their hearts with a radiant joy.
Overwhelmed by the experience the children ran home to frantically recall the experience to their parents. The parents were sceptical but knew their children were trustworthy and honest and so they went to where the children had experienced the visions to see if they could see what all the fuss was about.
For the whole month following the first visitation the parents were also witness to the same heavenly experiences and were left with only one conclusion. The visions were a sign from God.
A local vicar was brought to the scene and witnessed the same experiences as the children and parents. The visions occurred in the same location in a cave on Montserrat mountain. When this cave was explored by the religious elders of the community they found an image of the Virgin Mary. And from that moment on the cave became a holy sanctuary for religious pilgrims.
Today the site of the visions has been marked by a Holy Grotto on the mountain. You can walk to the Holy Grotto and see first hand where these events took place. The Holy Grotto has now been ordained a holy place and is visited by pilgrims and curious onlookers from all over the world."

I am excited to go. I'm reading up on the Montserrat Monastery, the Black Madonna and Barcelona.

Popular posts from this blog

Meet the Owners of a Scottish Castle

Painting in Scotland with Words

October 09, 2019
Dunskey Estate in Scotland was rugged and head-over-heels luxurious at the same time. I've just returned from teaching there-the second workshop for Workshops in Wild Places. The aim of these workshops is to encourage a deep connection with the land through meditative walking, hiking, reading poems outdoors, having happy hour on the beach at sunset, and other such important exercises, then coming into the studio to create an abstract response to the land.

While an imposing structure on the outside, the castle was cozy and sumptuous inside, with comfortable furniture, large and thick antique rugs, and fires blazing in each room we occupied. Our group took over the entire castle, eating gourmet dinners in the great hall, breakfast and lunch in the dining room and having meetings and discussions in the Drawing Room.


Set upon 2000 acres on the sea, this opulent estate has a wildly rugged side, with beech and pine forests and a long rough path edged with ferns that winds over a river…
Post a Comment
Read more

A Longing for the Sublime: Painting the North

April 21, 2019
Recently I attended a beautiful art exhibition by Oxanna Adams and Barbara Shaw at Silence, an art gallery/exhibition space in Guelph, Ontario. The exhibition entitled North, featured paintings that were inspired by the travels of each artist to northern countries, including Sweden, Iceland, Estonia, Yukon and Northern Ontario.

At their opening, each artist described her experience of being influenced by the wild landscape of northern countries. I had the deep sense that these places were profoundly inspiring for both women. I know that my work is also strongly influenced by remote, wide-open landscapes and I find it so difficult to describe that sense of awe in words.

I feel that painting can get closer to describing that sense of wonder than either prose or poetry. Still, I delight in finding writers and poets who stretch language into forms that approach the ineffable. And it's painting and words together that make my heart sing.